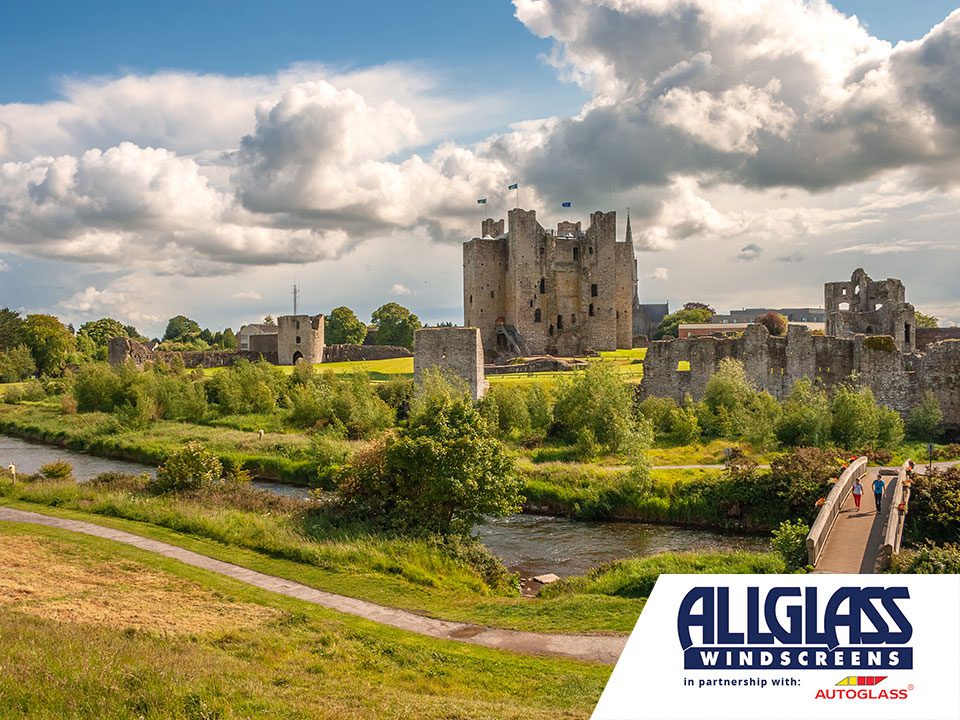 Ireland is full of breathtakingly beautiful and historically fascinating routes for drivers to explore. Considering the country’s array of stunning seaside destinations, many drivers can assume that coastal routes are the only way to go when they are planning their next road trip. But don’t be fooled, the midlands and Ireland’s Ancient East have much to offer for curious day trippers looking to take the road less travelled. So, with our focus firmly set on showcasing just some of the historical and cultural attractions that Ireland’s Ancient East has to offer, we’ve decided to dedicate this month’s blog post to The Boyne Valley Loop. Our specially tailored Boyne Valley road trip is designed to guide you through the magic of Ireland’s ancient landscape and some of the island’s most beautiful and fascinating heritage sites. 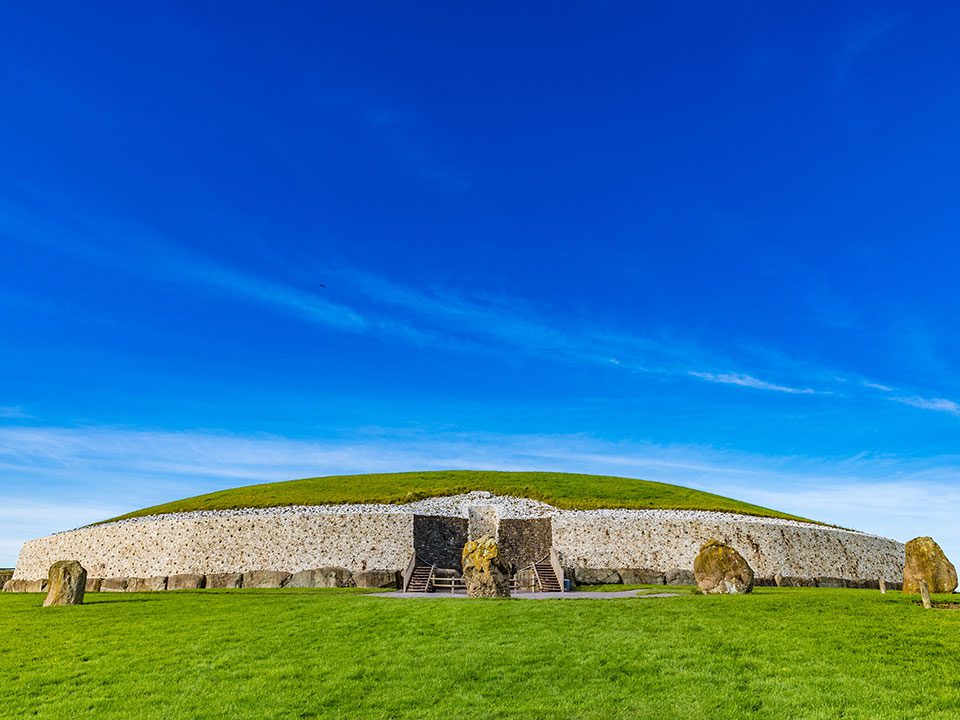 We’re starting our tour on a high with one of Ireland’s most recognizable locations – Newgrange. Newgrange itself is of course just one of the ancient marvels that make up Brú na Bóinne. Brú na Bóinne, situated within a picturesque bend in the River Boyne, is undoubtedly Ireland’s most archaeologically rich landscape and a truly unmissable stop on any tour of the region. The magnificent prehistoric tombs at Brú na Bóinne – Knowth, Newgrange and Dowth – are all believed to have been built in approx 3,200 BC. These remarkable structures are considered among the most important Neolithic sites in the world and between them boast the largest collection of megalithic art anywhere in Western Europe.

Fascinating as the monuments of Knowth and Dowth are, it is no secret that Newgrange is considered by many to be the jewel in the crown of Ireland’s Ancient East. For many years archaeologists classified the monument at Newgrange as a passage tomb. However in recent years Newgrange has come to be rightly recognised as much more than a simple tomb. Many now think that something like an Ancient Temple is a more fitting understanding of the monument – a place of astrological, spiritual, and ceremonial importance where luminaries of the period may be laid to rest.

Newgrange was constructed about 5,200 years ago which makes it older than Stonehenge and the Great Pyramids of Giza. Be sure not to overlook the 97 large curbstones which ring the mound – many of which are engraved with striking symbols that give us a peek into the culture and art of the megalithic period. 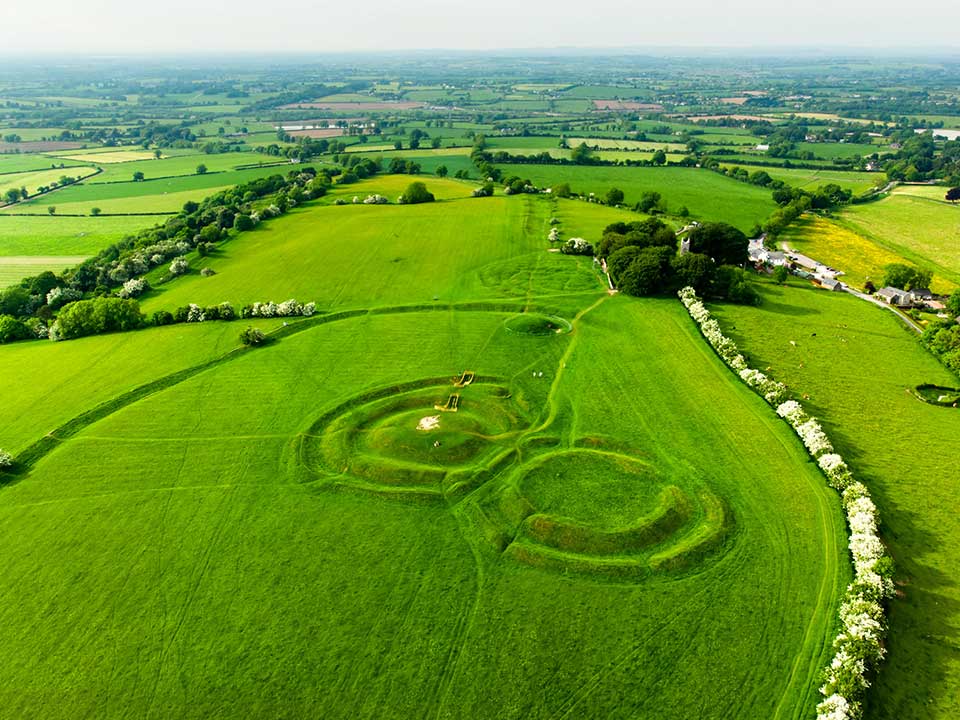 Next stop on our journey is the famed Hill of Tara. Long considered a site of particular natural beauty, The Hill of Tara has been of local significance since the late Stone Age, when a passage tomb was built there. However, the site grew to particular importance in the Iron Age and well into the Early Christian Period when the location was adopted as the seat of power for the High Kings of Ireland. St Patrick himself visited The Hill of Tara in the fifth century. As Christianity achieved dominance over the following centuries, Tara’s myth remained and its meaning grew to be more symbolic in nature though no less potent.

Tara consists of numerous monuments and earthworks that track it’s significance through ancient Irish history – from the Neolithic to the Iron Age – including a passage tomb (the “Mound of the Hostages”), burial mounds, round enclosures, a standing stone (believed to be the Lia Fáil or “Stone of Destiny”), and a ceremonial avenue. There is also a church and graveyard to explore.

It is said that all old Irish roads lead to this critical site so it is of course a fitting stop along our journey around the Boyne Valley Loop.. 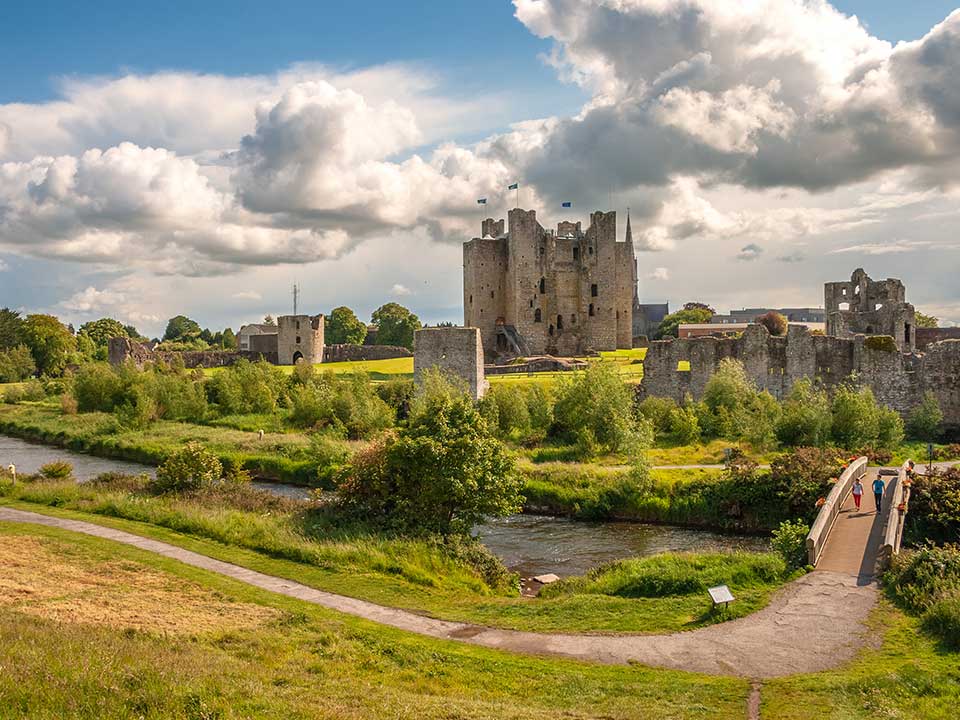 As we carry on our journey through the historical heartland of the Boyne Valley, we set our sights on the mediaeval hub of Trim. Few places in Ireland contain more medieval buildings than the heritage town of Trim. Trim Castle is beyond a shadow of a doubt the foremost among those monuments to Ireland’s medieval past.

Trim castle is the largest Anglo-Norman fortification in the country. The Norman landowner and Lord of Meath Hugh de Lacy and his successors took more than 30 years to complete the castle. No small amount of that considerable construction time was dedicated to the monumental three-storey keep found at the center of the fortification. This massive 20-sided tower was considered all but impregnable in its day and was even surrounded by a ditch and water-filled moat.

Modern walkways now allow you to look down over the interior of the keep – a chance to appreciate the sheer size and thickness of the mighty castle walls. 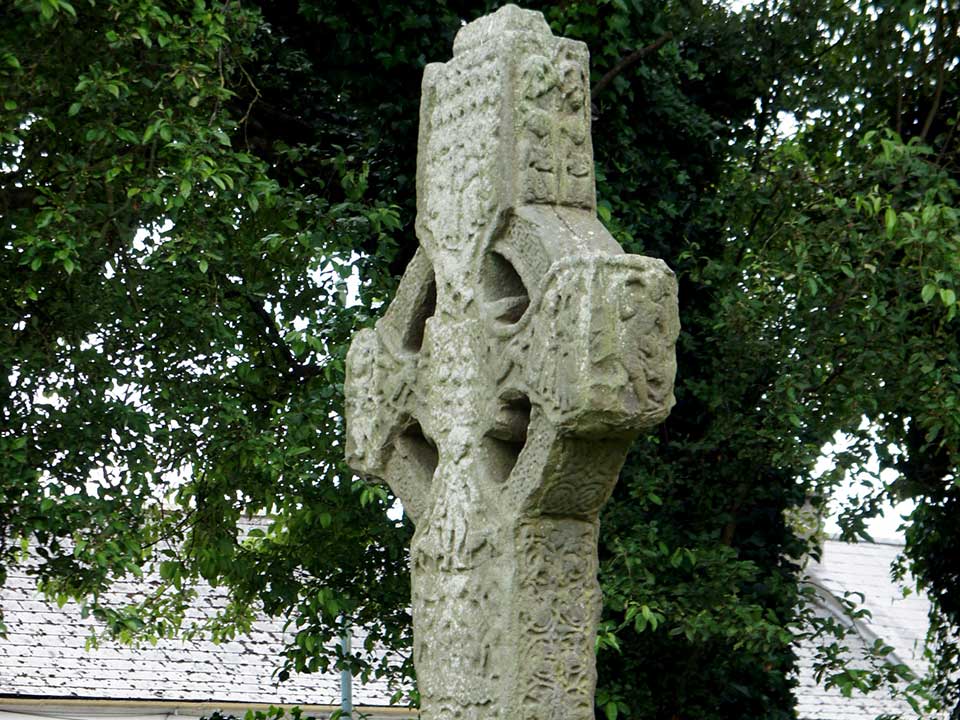 Having taken in the neolithic art and breathtaking views around the Loughcrew Cairns, we’re moving toward the bustling town of Kells to take a look at some of the remarkable monastic monuments that dot the area. Aside from its historical significance, the area surrounding Kells also boasts a number of fine hotels and eateries that would make for ideal pit-stops along your way. We recommend Decoy Country Cottages, Bellinter House and both the Newgrange Hotel and The Ardboyne Hotel – all of which are a short distance from the center of Kells.

As well as the Book of Kells the town is also famous for its five High Crosses. Three of the crosses, and the base of a fourth cross, are located on the grounds of St Colmcille’s Church, the fifth, and probably most well known, is the Market Cross.

The Market Cross originally went by the name of the “Cross of the Gate” as it was once located at the eastern side of Kells Monastery and marked the point where a fugitive could rightfully claim sanctuary. Its carvings depict a number of recognisable biblical tales and images like the Sacrifice of Isaac, the Miracle of the Loaves and Fishes, and the Crucifixion. The unknown sculptor is thought by some scholars to have also been responsible for the High Crosses at Clonmacnois, Durrow, and Monasterboice. The damage to the cross is attributed to the army of Oliver Cromwell during the 1650s and local stories also say that it was used for hanging Irish Rebels after the 1798 rebellion. 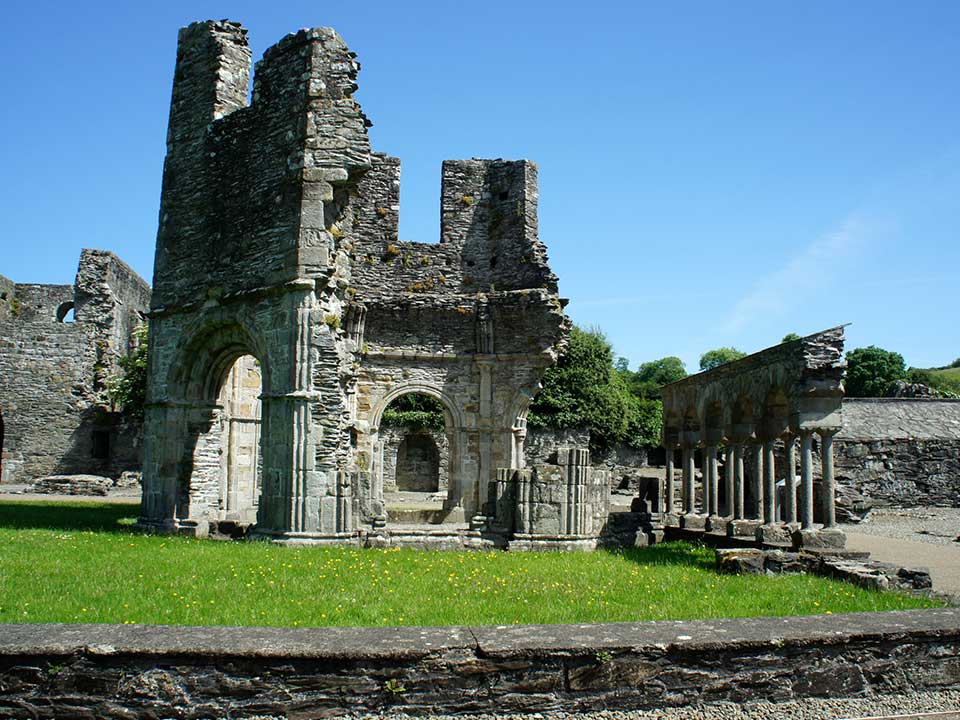 Moving on from the hustle and bustle of Kells town, we arrive at the oasis of calm that is old Mellifont Abbey. The Abbey was the first Cistercian monastery in Ireland and founded by St Malachy of Armagh in 1142 with the help of a small number of dedicated monks sent by St Bernard from the famed monastic commune at Clairvaux. Apparently the monks – more accustomed to the sunnier climes of Burgndy – did not take well to Ireland and soon returned to France. Despite the French Monks departure, St. Malachy managed to see the momentous building project through to completion.

The abbey went on to prove central to the history of later centuries too, The Treaty of Mellifont, which ended the Nine Years War, was signed here in 1603, and William of Orange used the abbey as his headquarters during the Battle of the Boyne. 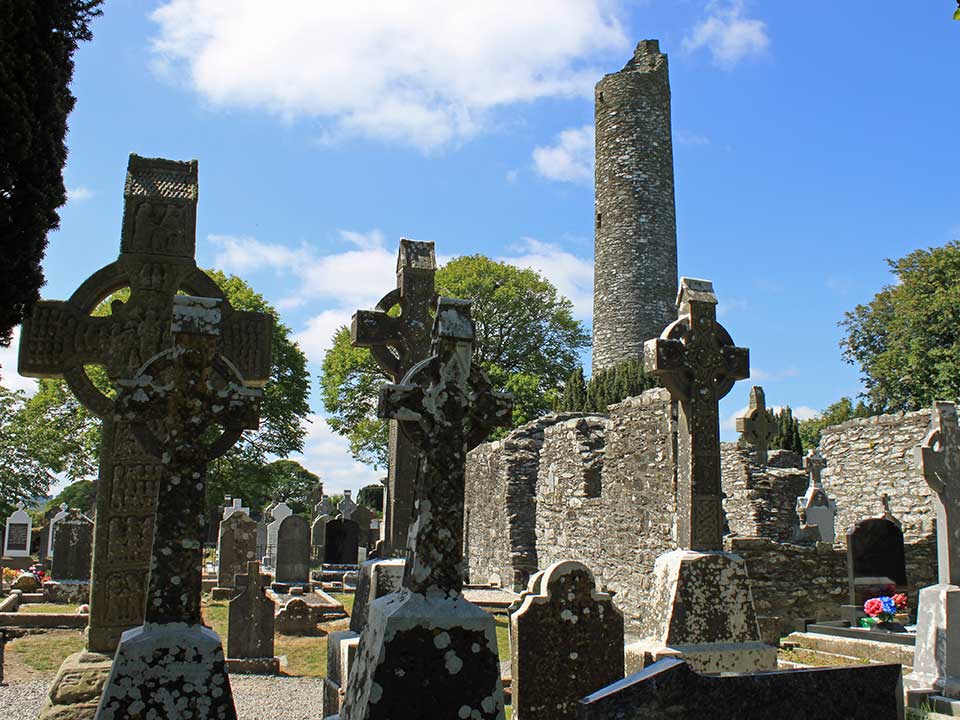 As we enter into the final stages of our scenic drive, we still have much to look forward to on our approach to Drogheda. Monasterboice is a fascinating monastic site with an impressive round tower and two high crosses and continues to attract visitors from all over the world.

The historic ruins of Monasterboice are of an early Christian settlement founded in the late 5th century by Saint Buite (who died around 521), it was an important religious centre until the establishment of nearby Mellifont Abbey.

Around the site you can explore an old graveyard, two churches and examine the monk’s sundial but Monasterboice is most famous for its aforementioned spectacular high crosses. Inside the ruins stands the impressive Muiredach’s High Cross (5.5 metres high), regarded by many as one of the finest examples of the form in the whole of Ireland. It features biblical carvings of both the Old and New Testaments of the Bible and there is even a replica in the Victoria and Albert Museum in London.

The crosses stand in the shadow of the remarkable four storey round tower which would have once been used as a watchtower and refuge for monks during Viking attacks. 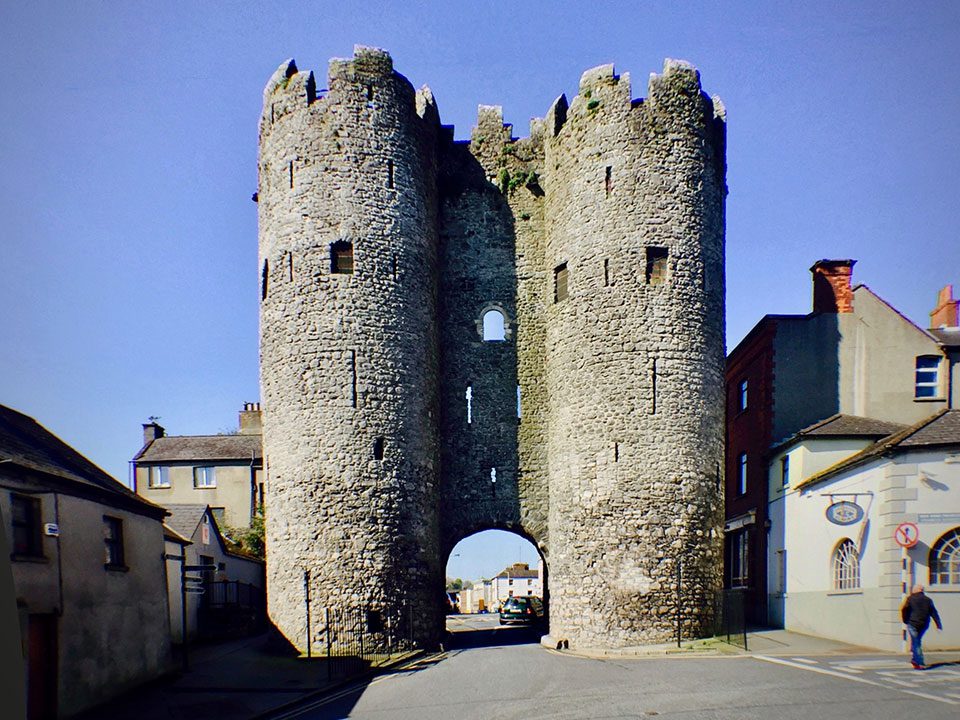 Our time exploring the Boyne Valley is coming to an end but there is still much to enjoy in the beautiful midlands town of Drogheda. It’s worth noting that due to the looped nature of the route, you can of course begin your tour around The Boyne Valley wherever you find most appealing. So, depending on what suits your travel plans better, Drogheda is a perfect starting or ending point for this trip. It can also serve as a fantastic base if you wish to explore the Boyne Valley region over the course of several days. The renowned Scholar’s Townhouse Hotel is an ideal spot if you’re looking for somewhere to stay with a little bit of charm and character of its own. Located smack bang in the middle of town, the hotel was constructed in the late 1800’s and originally served as a Christian Brothers monastery.

One of the historical highlights you can expect to find in Drogheda town is the wonderful Saint Laurence’s Gate. Constructed in the 13th century as part of the walled fortifications of mediaeval Drogheda.

The structure consists of two towers, each with four floors, joined by a bridge at the top, and an entrance at street level. Access to the interior of the fortifications is gained via a flight of stairs in the south tower. Evidence remains of a slot underneath the arch from where a portcullis originally could be raised and lowered to defend against attack. The top of the Gate features stunning views of the Boyne and is a perfect spot to reflect on all that you’ve seen over the course of your time exploring the wealth of fascinating historical locales that dot the Boyne Valley.

We hope you enjoyed our guide to just a smattering of the heritage highlights that the Boyne Valley has to offer. Be sure to check back with the Allglass Autoglass blog soon for more road trip tips, motoring explainers and road safety guides. Stay safe and happy road tripping!