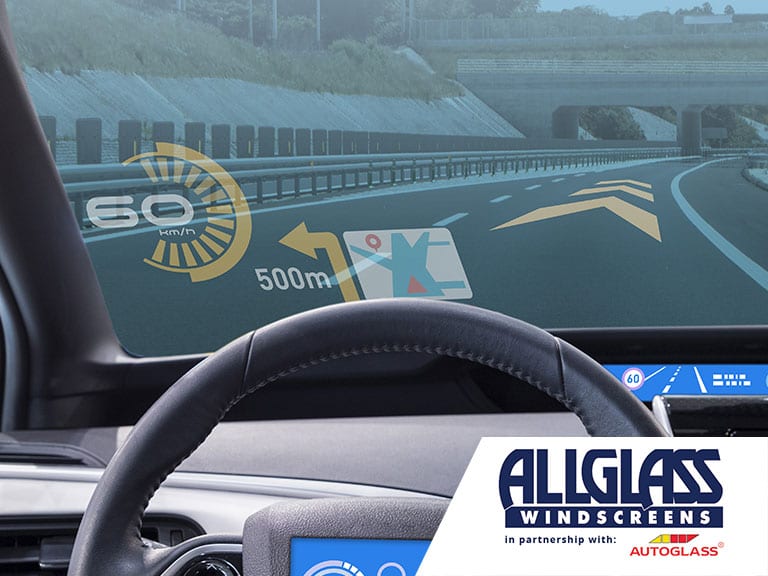 In the last few years, we’ve seen massive advancements in vehicle heads up displays, panoramic windscreens and a slew of other futuristic developments in motoring. Here at Allglass Autoglass, we always strive to keep our customers abreast of the latest trends in automotive technology. So, with that in mind, we’re taking an in depth look at some of the upcoming car technology that drivers can expect to encounter sooner than you might realise..

Firstly, we have the latest offering from the South Korean electronics megabrand; Samsung. Samsung have been working to include augmented reality technologies in to their HUD navigation systems since debuting the concept all the way back in 2018. Of late, Samsung have expanded on the specifics of their vision for the future of motoring – in a recent press release, the brand revealed its newest Digital Cockpit 2021, which boasts an enviable array of super-clear displays and futuristic safety features.

Samsung have described their Digital Cockpit 2021 as part of a broader mission of “transforming vehicles into places where passengers would love to stay,” without losing sight of their goal of – as the brand says themselves – “simplifying communication and delivering fun on-the-go experiences”. Sounds good to us!

In essence, The Digital Cockpit is centered around a 49-inch QLED display. In default mode, the screen rests neatly behind the dashboard. In this standard setting, only half of the screen is exposed. This is enough to display essential information like your speed, maps and driving settings. If the driver switches the Digital Cockpit to “media mode”, the interface should reformat to better serve the needs of the driver. Designed for use when the car is parked, “media mode” prompts the cockpit’s screen to rise to a more prominent position in the center of the display. At the same time, the entire dash panel moves downwards to provide more space in the cockpit. In this mode, drivers can watch a film or live concert, play games, make a video call, or even edit multimedia files in full screen. One particularly impressive feature is the “out-cabin” screen fitted to the rear of the vehicle. This snazzy piece of kit affords drivers the chance to watch and stream content from outside the vehicle – perfect for camping.

It’s not all fun and games though. There are also no shortage of practical benefits to the proposed Digital Cockpit. By utilizing a wide range of in-cabin sensors and cameras, Digital Cockpit 2021 also incorporates Automotive Samsung Health. This remarkable system, pioneered by Samsung, analyzes the health of both drivers and passengers before entering the vehicle using a combination of cameras and wearable devices. The system can monitor your stress levels on the road and adjust the vehicle’s music, lighting and even aroma with a view toward cultivating the most relaxing driving experience possible. Not too relaxing though! The system also analyzes the drivers sleeping patterns and eyelid movements to ensure they aren’t dozing off behind the wheel.

Samsung’s cockpit concept also employs AR technology. Their augmented reality windshield boasts a floating window display in the top-center of the windscreen, which effectively functions as a digital rearview mirror which also keeps the driver informed of weather conditions, necessary changes to their route and even traffic signals.

If all that wasn’t impressive enough, the system also includes a 360 degree external monitoring system to increase safety on the roads. Through utilizing a combination of four cameras and a deep learning algorithm to recognise vehicles and pedestrians around the vehicles, the system provides instantaneous real time notifications to the driver about potential hazards. Even more strikingly, the system also boasts an integrated external screen designed to relay short messages relevant to pedestrian safety. On a similar theme, the vehicle also has a directional speaker that is softer-sounding than conventional car horns, which is apparently loud enough to grab the attention of pedestrians and ‘soft’ enough so as not to disturb your neighbors.

According to Samsung, even rear passengers will have control over certain features of the Digital Cockpit with the aid of an integrated control pad at the rear center armrest. When not in use, these rear controls seamlessly fade in the background for a sleeker, more futuristic look. Though The Samsung Digital Cockpit 2021 is still just a concept at this early stage, it’s safe to say that we are eagerly looking forward to seeing it rolled out in the coming years.

Our next projected trend in future windscreen technology comes courtesy of the boffins at Texas Instruments. The engineers at Texas Instruments claim that their IP HOE Display (in-plane holographic optical element) is set to change the face of automotive heads up displays in coming years..

The IP HOE Display requires a fraction of the space demanded by its predecessors. The system achieves this by employing a combination of a small projector embedded in the car’s dash and a layer of holographic film laminated within the carglass. This film effectively turns the windshield into a screen where the dash can project an in-plane hologram of the car’s instruments and other information.

This approach eliminates the need for a wedge shape, usually associated with an augmented reality windshield. The IP HOE Display is likely to spell major changes in smart automobiles and cars with augmented reality as we now understand them, since the projector no longer has to be mounted directly between the driver and the windscreen. Texas Instruments claim that this makes the system ideal for vehicles like sports cars, where dash space is at a premium and the windscreen is steeply raked. IP HOE has further practical applications for commercial vehicles, such as heavy trucks, which have near-vertical windscreens. The particulars of the glass in both sports cars and heavy vehicles has previously precluded them from utilizing existing AR technology and heads up displays.

Much of the talk surrounding advancements in windscreen technology is centered on the continued improvement and integration of heads-up displays. Audi have taken this idea even further with their prototype Q4 e-Tron electric SUV. The Q4 e-Tron interior is full of futuristic design flourishes but the most strikingly forward looking feature is the vehicle heads up display.

HUD Navigation is by no means a totally new development. In fact, it isn’t uncommon for cars on the roads today to feature some minor projections on to their windscreen. These Heads up Displays usually focus on the most helpful but basic of information like your speed or directions from your sat-nav. Using current technology, these details usually float comfortably in the driver’s eyeline so they no longer need to glance down at their dash. Audi is now taking the HUD to the next, logical step – make it bigger. Current Heads Up Displays project only a small shape and relatively limited information onto the screen. The Q4 e-Tron’s new display projects higher up the windscreen, and when it’s switched on, the relationship between the projection and the driver’s eyeline means that the HUD appears to the driver to be almost 70-inches across!

Naturally, this affords Audi the opportunity to project more information on to the augmented reality windscreen. The Q4 e-Tron’s HUD uses a technology Audi have dubbed a ‘virtual drone’ which hovers in the road ahead, appearing as a blue arrow guiding the driver in the right direction. The augmented reality windshield can also be used to monitor other traffic around you, warning the driver when they’re getting too close to the car in front, and even using algorithms to interpret the ‘body language’ of other cars as a means of predicting their next move!

The coming years are sure to herald some significant leaps in automotive glass technology. In fact, several major auto manufacturers are currently working with panoramic windscreen technology unlike anything we’ve ever seen before. Panoramic windscreens wrap around much of a vehicle’s front/roof and were designed to serve as both windscreen and a sunroof. Due to their increased size, they vastly expand the driver’s range of visibility and allow the driver to make better informed decisions behind the wheel. Crucially, the glass is also layered with a specially designed solar tinting to protect drivers from getting blinded by continuous exposure to sunlight.

One particularly exciting development with regards to panoramic windscreens comes courtesy of the engineers at McLaren. McLaren’s concept for a new and improved wiperless windscreen remains a work in progress but should be appearing on the roads in the next year or two. These new windscreens won’t require any wipers to clean off liquids and ice. Through using ultrasonic sound waves, these futuristic windscreens will be able to slide off any moisture as soon as it comes into contact with the surface of the glass. No more defrosting windscreens on a wintery morning? Sounds good to us!

There you have just a sample of the amazing developments you can expect to see in automotive heads up displays and cars with augmented reality in the coming years. Be sure to check back with the Allglass Autoglass blog regularly for more motoring news and car safety tips and guides. Drive Safe.